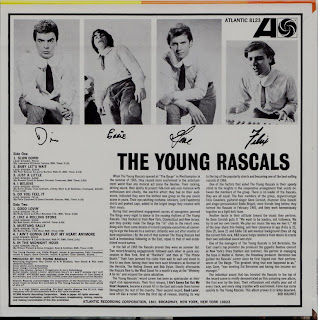 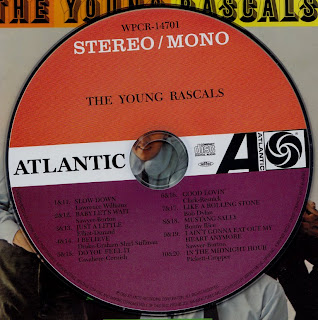 The history of '60s rock is littered with stories of great rock classics -- the Savages' album, the Thirteenth Floor Elevators' first two albums, the first two Chocolate Watch Band albums -- that should have been better known than they were. The Young Rascals is that rare example of a genuinely great album that got heard and played, and sold and sold. Apart from the presence of a hit ("Good Lovin'") to drive sales, every kid (and his girlfriend) in any aspiring white rock band on the East Coast in 1966 seemingly owned a copy. And it's easy to see why -- the Rascals' debut couples a raw garage band sound with compelling white soul more successfully than just about any record since the Beatles' Please Please Me. The band had three powerful singers in Felix Cavaliere, Eddie Brigati, and Gene Cornish, and an attack honed in hundreds of hours of playing dance clubs on Long Island and New York City. The result is a record without a weak moment or a false note anywhere in its 35 minutes: "Do You Feel It" shows them crossing swords stylistically with Smokey Robinson & the Miracles; "Just a Little" and "Like a Rolling Stone" show off their folk-rock chops; and "Slow Down," "Good Lovin'," "Mustang Sally," and "In the Midnight Hour" are all '60s rock & roll classics in these versions. "Like a Rolling Stone," in particular, now seems all the more compelling, pointing the way toward a future that included Hendrix's version of "All Along the Watchtower." The original Atlantic album was one of the label's best-sellers of the mid-'60s. [allmusic] Here
Posted by Georgie Hirezola

Many thanks for introducing me to this group, and for your thoughtful intros.

Good Lord of Rock, man, you're still living, hope everything is OK.......many thanx, Rascals was a great band and sadly, forgotten.

Hmm..Yes I am OK now!!
I had a big problem in my family which kept me away all this time.
I hope everything will be OK from now on!
Thanks guys for the comments...

i am glad you are back, missed you...best wishes...

Thanks for sharing these classic Rascals LPs!

Great pleasure to find you back with this great band.
Thanks.

Great to have you back! Many Thanks Paul

Thanks for the great music!

awesome Rascals posts.....my wife was a HUGE Rascals fan and is loving all these discs....thanks again from Boston, MA!

Welcome back! You have the two best music blogs on the web.

One suggestion: could you use something besides UploadMirrors as it is a scam? All mirrored links listed there don't work on any of your old posts, and they try to trick you into downloading malware.

Otherwise, thank you for the great music.

Thank you god, you are alive!! we missed you, this great blog needs to last forever.

why do not Uploaded.net?

Rapidshare is not good, is Down.

A classic. Thankx a lot.

HOŞGELDİN KOMŞU !
ITS VERY NICE TO HEAR YOU AGAİN !
HAAR FROM ISTANBUL

Many, many thanks for posting the Rascals. Missed you much.
Sto kalo, Alfred

THanks Georgie, I became crazy of this awesome Rascals posts. xo xo
- Vinnie

HI,GEORGIE.IT'S ONE OF THE SMALL TOWN PLEASURES TO HAVE YOU BACK HERE AGAIN.I DOWNLOADED THIS ALBUM OF THE YOUNG RASCALS AND IT WAS OK.THANKS A LOT AND MY CONGRATULATIONS.GREETINGS FROM TEZIUTLÁN,PUEBLA,MÉXICO.

Man! what a fantastic album! Thanks! I just discover the blog

Older Post Home
Subscribe to: Post Comments (Atom)
Remember...
The albums,the cover photos & the mp3 links here are for promotional & preview purposes only!
So if you like an album please support the artist who performs & buy it from your local store.
Or just follow the links in this page to order your favorite music from the Internet stores.
Thank you.