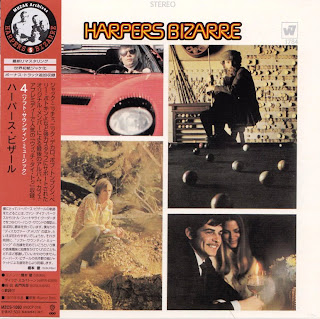 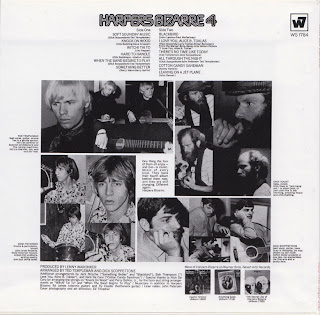 If any group and song was the prototype for sunshine pop, it would be Harpers Bizarre and their hit version of "Feelin' Groovy". Their high range choir boy harmonies, positive themed material, and sophisticated arrangements were all part of the genre's model.
Along with Spanky and Our Gang, The Association, The Sunshine Company, The Free Design, The Cowsills, and the Fifth Dimension, Harpers Bizarre produced music that poured out of AM radios in the 1960's.
"Harpers Bizarre 4" was originally released in 1969 as their fourth LP.
This set finds the group breaking away from their usual sound. Ted Templeman and Dick Scoppettone are still singing soft and high, but the lush orchestration of strings, flutes, and oboes, has been augmented with a more organic mix of guitars, horns, and prominent percussion.
The song choices are different, also. Instead of new takes on standards and show tunes, there are two Otis Redding compositions("Knock On Wood" and "Hard To Handle"); a Beatles favorite ("Blackbird); some folk ("Cotton Candy Sandman" and "Leaving On A Jet Plane"); plus the usual smattering of originals ("When The Band Begins To Play", "There's No Time Like Today", and "All Through The Night"). The prototypical Harpers Bizarre sound is featured on the movie theme "I Love You, Alice B. Toklas".
Highlights include their absolutely hypnotic take on Jim Pepper's "Witchi Tai To"(wow!); Barry Mann and Gerry Goffin's "Something Better" and their own autobiographical "Soft Soundin' Music"(with some nifty guitar work).
Bonus tracks include Harry Nilsson's eccentric "Poly High" and Tommy Dorsey's gospel tinged "If We Ever Needed The Lord Before".
There would not be any more releases from the group until 1976, when 4/5 of the original line-up reunited for the Forest Bay LP release, "As Time Goes By"...[net]
Here
Posted by Georgie Hirezola

Georgie,
A great blog , great music and layout- thanks for letting me sample some great music.

thanks a lot.
have a scratchy record - now i have the mp3s