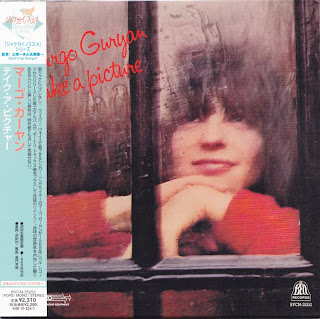 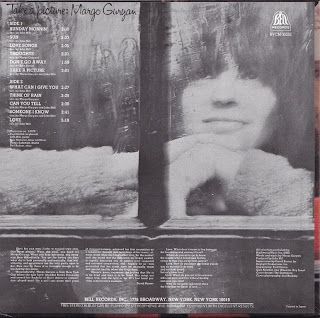 Take a Picture has taken on a dynamic life of its own since its 1968 release, especially for an album that went relatively unheard at the time. It is not difficult to figure out what all the retroactive acclaim is about once you hear the sweet, delicate strain of gently kaleidoscopic music on the sole album from Margo Guryan. It is the soft pop of which gauzy dreams are made, full of the hazy changes and transitory variations of autumn, an album that you invariably want to wrap up in.
The thing that really elevates her above many of her contemporaries and competitors for the soft rock tiara, though, is her wonderfully idiosyncratic songwriting capabilities. A classically trained pianist and jazz composer by education and trade, her songs are much more than your standard pop fare. Although the song structures are simplistic on a superficial level (which should have made them perfect nuggets for commercial radio play in 1968), the arrangements beneath them are anything but. There are all kinds of intriguing things going on with or underneath the melody, either instrumentally (hammy trombones, old-tavern piano, touches of sitar) or via affect. Just when you think a chorus or hook is as ethereal as it could possibly be, Guryan tweaks it just slightly enough that it rises even higher and takes you to an even more elevated emotional plane. She manages the difficult trick of cajoling something already beautiful to something truly sublime. There is also an expert, fluid balance of juxtapositions within the music. Tempos are shifted frequently but seamlessly, and Guryan's chord progressions tend to switch from balladic choices during the slower verses to sly and unconventional jazz progressions during the quicker paced breaks and bridges, with the influence of bossa nova particularly heavy in many of the tunes. Her classical background is spliced into the mix as well, generically via the orchestral splashes of various songs, but more explicitly on "Someone I Know," where her own pop melody is superimposed over the chorale of Bach's "Jesu, Joy of Man's Desiring." The two fit perfectly, point and counterpoint, like the complex pocket symphonies of Brian Wilson, a huge influence, and far more interesting with each listen. Other highlights include her own version of "Sunday Morning," the breezily kittenish "Sun," and the tough go-go groove of "Don't Go Away," but really every song is a gem...[net]
Here
Posted by Georgie Hirezola

This is a fantasic album! Thanks for the japanese remaster, it sounds really good!

Do you by chance have the Linda Perhacs album, I have read about it but never heard it. If you like it then......

a new favorite!! I can't believe how good this LP is...barnyardmusic.blogspot.com

a new favorite!! I can't believe how good this LP is...barnyardmusic.blogspot.com

Hi from Cy
Please note:
I have loved most of the postings from Small Town Pleasures BUT THIS is simply a fantastic record.
What I liked about the listen was the drama that Margo Guryan brings to her mini tales from her experiences.
Thank you very much for letting me hear this.
Cy from Pck.

Yes, a fantastic album! I've been turning the LP over and over again. Also funny that Linda Perhacs' "Parallelograms" turns up, since I bought both these albums on monday.

Its possible on FLAC please?