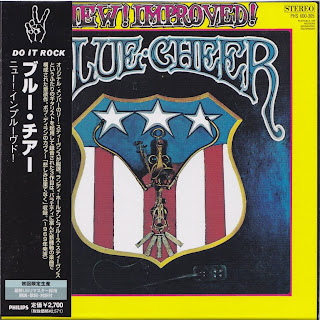 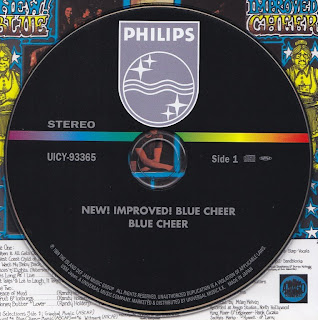 Fans of early Blue Cheer won't want to miss this amazing transform.. from loud and raucus rock to fine tuned and tasteful rock and roll. Side two of the album in particular flows through Peace of Mind and Fruit and Icebergs. Peace of Mind is filled with mild and powerful musical statements. Some of the absolute best dual lead guitar solos ever performed will absolutely wreck you. Fine and somewhat eerie harmonies will move you. An emotional masterpiece. Fruit and Icebergs is performed in the best 3 piece rock band tradition. Reminiscent of the glory days of Cream, Leslie West and Mountain and others of that time with the originality you've come to expect from Blue Cheer. Certainly every song on the album is worthy of high mention and praise but if these two songs in particular don't strike you in the rock and roll jugular then your veins are tapped out....[net]
..............................................
Originally released in 1969,as this was Blue Cheer's third album. Almost as good as their first two lp's,'Vincebus Eruptum' and 'Outsideinside'. Even though bassist/vocalist Dickie Peterson and drummer Paul Whaley are joined by two 'new' guitarists Randy Holden and Bruce Stephens,'New Improved!' is still a worthy pick.Tracks that impressed me the most were "West Coast Child Of Sunshine"(a good psychedelic piece),"Aces 'N Eights",their Dylan cover "It Takes A Lot To Laugh,It Takes a Train To Cry" and "Honey Butter Lover"....[net]
Here
Posted by Georgie Hirezola

yeahhhhhhh
gime some
FUUUUUUUUUUUUUZZZZZZZZZZZ........
what a great way to start the year ! !
hope to see this blogs a couple of more ejjeje..

hellooooooooooooooooooooo man!!!!!!
where are you?????
well..let me guess..in the US????
YEEEEEEEEEEEEEEEEEEEEEESSS!!!!
jajajajjajajaaaaaajjj(I know it!!)
wish I was there too!!!
Happy new year Pablo!!!!!
.......................
unfortunately its the only "Blue cheer" album I have...
you know me! I dont want to bye these albums in other low badge cheep reissues...only on PHILIPS JAPAN.jejejejejje...
or original vinyls!!
cheers..stay in tune..
George

I totally agree with your assesment of this timeless, classic interpretation of one of the all-time best LP's of Earth.