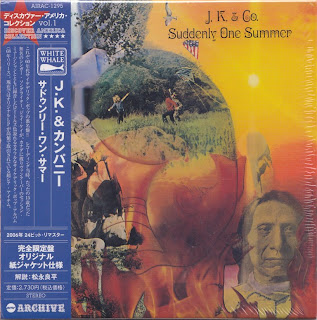 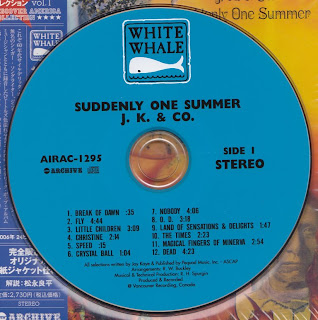 This album was created by J.K., a 15-yr. old (!) who was used to hanging out with musicians and entertainment types. The kid also took acid (and judging from the lyrics, heroin) and listened to the Beatles, and this album is the result of those experiences, and also trying to create a song cycle that described the think line between life and death, with songs about childhood and innocent love in the beginning, then growing awareness in the middle, and then death at the end, all shot through with a sense of freedom and release.
It is a quite effective effort, and the music is very interesting and sophisticated, particularly for such a young mind. "Fly" is gorgeous and very Beatles-esque, almost worth owning the album alone. "Christine" is a nice simple love song, and "Nobody" and "O.D." introduce the darker side of awareness leading to the many-faceted "Dead" that closes the album. The album is extremely interesting!!
The musicianship is also very good, with psych-tinged guitars bouncing here and there, droning bass pulsing in the background and various other studio effects for good measure. (Backwards Piano, sitar, some mellotron... you name it.) Really, it's all outstanding stuff. Jay's voice also fits the theme of the record perfectly and is often haunting and spooky in it's delivery...
Here
Posted by Georgie Hirezola

yes
amazing that a child made this ah?

got this original
ill share the scans with you soon

Yes I was wondering if this cat was still alive aswell.

I love this album, have done for a while.

I've been hanging around a few days now George and wanted to say a big thanks for the work you have put in here. Your blog is out of sight man.

yes he is still alive and has a blues band..here's his website: