ASHKAN - IN FROM THE COLD (DECCA 1969) Japan cardboard sleeve remastered 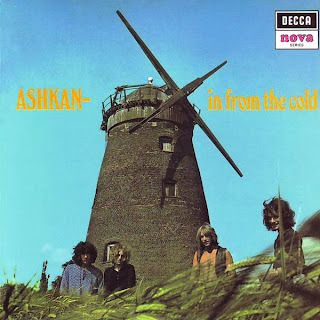 Ashkan's In from the Cold was the first album released on Decca's progressive Nova label. Co-produced by Peter Sherter and Ian Sippin, much of the album bares an uncanny resemblance to early Spooky Tooth. Propelled by Bailey's hoarse vocal growl and the band's penchant for screaming guitars, this comparison is reinforced on tracks such as "Going Home", "Take These Chains" and "Out Of Us Two". Elsewhere, Bailey sounds like Joe Cocker on "Practically Never Happens", while Bob Weston's "Slightly Country" sounds like it was stolen from the early Steve Winwood and Traffic catalogue. With the exception of the pedestrian blues number, "Backlash Blues", but including the extended "Darkness", the album, is worth hearing. "Practically Never Happens" got a further airing on Broken Dreams, Vol. 6 (LP).
Here
Posted by Georgie Hirezola