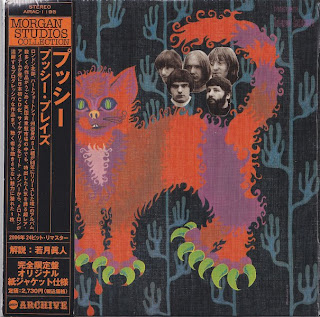 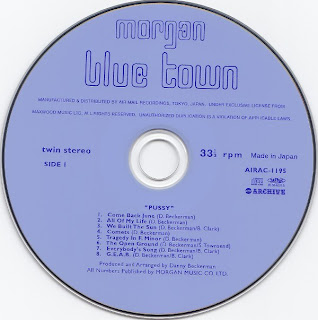 Well, how many albums do you hear that sport a meowing cat for an introduction? With pixie-like vocals, which puts them in the early Pink Floyd territory, Pussy's modus operandi throughout the album is a heavy, funereal keyboard style laced with freaky guitar solos. But this is by no means a dark and gloomy album. Off-kilter would be a better description. The opener, "Come Back June" sports a surf-like Ventures style rhythm with a punchy guitar break halfway through. "All My Life" and "We Built The Sun" are more spacey, cerebral organ sponged songs. The former borders on drug-induced self pity, while the latter, through the lyrical personification of nature, tries to be somewhere else entirely-in the land of the sun people. Make sure you're sitting down for the interstellar overdrive of "Comets", which is the hands-down centerpiece of the album. You won't believe what's at the epicenter of this freak out either-yes, a raging theramin solo (or at least a keyboard that sounds very convincing)! Returning from that trip leads you to the gentler, earthier "Tragedy In F. Minor", that recalls some of the Pretty Things work on the S.F. Sorrow album; the acoustic guitar is wonderful on this piece. The last song, the instrumental "G.E.A.B." is another heavy standout, this time featuring guitar workout that builds to a fuzzy rave-up climax-and then the cat again...Highly recommended.
Here
Posted by Georgie Hirezola

You have a great music blog here! I've added you to my mp3blog list and custom search, check it out.

Rickdog's collected 6,000 mp3blog links, accessible from the alpha menu at page top. You can open frames on these blogs to view them directly on my site, and you can also view the feeds in a frame.

You can search your blog and all the others in my custom google search:

I add new blogs to the alpha lists once a week, but your site is immediately added to the custom google search engine.

thnx a lot for ur comment rickdog...
also for adding me...its great!
Georgie

Thanks a lot for all these Jap remasters. You're doing a great service to the world (well, music fans at least). You rock!

Thanks for the music !!
Peace.