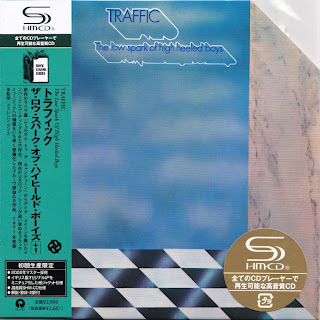 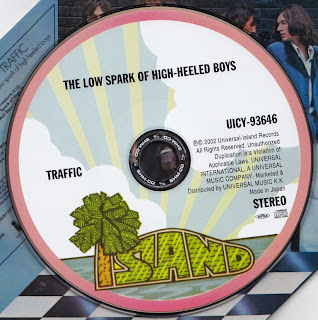 Despite not even charting in the band's native England, this album became a platinum-selling American hit on the basis of three enduring FM radio staples--the expansive, jazzy 12 minute title track, and the more straight forward funk of the R&B charmers "Light Up or Leave Me Alone" and "Rock & Roll Stew." Those disparate tracks perfectly underscore Traffic's rich musical appeal and its restless, sometimes problematic creative and interpersonal relationships. With now thrice-departed Dave Mason out of the mix and percussionists Jim Gordon and Reebop Kwaku Baah participating in the studio for the first time, the band's innate musicality truly takes wing. Winwood's familiar vocal phrasings nearly take a backseat to his fluid, dramatic guitar work on "Rock & Roll Stew Roll" and "Many a Mile to Freedom," while the Tull-ish, folk-madrigal sensibilities of "Hidden Treasure" and "Rainmaker" are further punctuated by Chris Wood's deft flute and woodwind flourishes.
Here
Posted by Georgie Hirezola